A famous Filipina model, actress, and beauty queen, Michelle Zulueta Aldana was crowned Mutya ng Pilipinas and Miss Asia Pacific International. She graduated at the University of the Philippines, Diliman, Quezon City, Philippines in Bachelor of Arts in European Language. She decided to move to Germany at the peak of her acting and modeling career and quit the movie industry for good. On June 9, 2001, Michelle married Christoph Heinermann in Marl, Germany, and they were blessed with two sons namely Dustin and Kai.

Her husband was a director of a multinational telecommunications firm, Gateway Communications. They migrated to South Africa in 2002 and utilized a 20 hectare estate into an indigenous forest/wildlife sanctuary, a Eurasia restaurant that serves Western and Asian foods, which is now called The Midlands Forest Lodge. Currently, Michelle is gradually making herself known in South Africa as an actress, where she also played in one of the TV teleseryes in the country entitled “The Wild.”

Her sudden disappearance in the Philippine showbiz industry was something personal because she had to choose between the commitments to her partner over her acting career. She was already engaged to her German boyfriend, and he needs to go back to his work. She decided it was time to move on a new phase in her life, and this is it. Fate had been good to her and she was successful in her new career as a businesswoman.

But Michelle admitted that she also had her own shares of problems with her husband and they had finally separated because of individual differences. Now, she is happy and contented being alone and enjoying her children more than anything. She is also busy teaching and doing some modeling, and she is helping some women for a cause.

Some time ago, Michelle expressed her interest to do some movie projects here in the Philippines and to put up a business, but unluckily her plans did not progress.

If there is something worthwhile that she learned from the Westerners is their being punctual. She says that when you are late, you lose money. She once had an experience of being late in her classes and to her surprise, the class was dismissed. In Germany, time is essential, and time is money. Today, she still carries that character trait in all her dealings in South Africa. She hopes to be more successful for her children and teach them Filipino values and culture.

Michelle is privileged to be given a break as an actress in South Africa, because she admits, she misses her acting career in the Philippines. Somehow, if she is working in some of the television shows there, she can apply what she had learned down here in the Philippines. Michelle still takes pride being a Filipina, wherever she goes. She is still the Mutya ng Pilipinas, and Miss Asia Pacific International of the Filipino people.

Posted by Profiles - March 4, 2021 0
Carlene Ang Aguilar was born on February 8, 1982 to Raul Aguilar and Catherine Ang. She is a Filipina actress,… 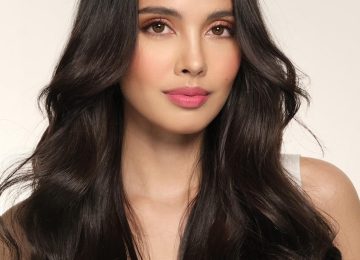 Posted by Profiles - March 4, 2021 0
Nina Ricci Alagao is a Filipina actress, model, make-up artist, host and a former “Binibining Pilipinas 2000” and represented the…