Dick Gordon an incumbent senator, has served in the upper chamber of Congress for over 11 years. He has also chaired the Philippine Red Cross since 2004.

He has led the passage of laws aiming to transform the political and economic landscape of the country, including the automated election system law, the one-time tax amnesty law, and the Tourism Act of 2009. He was also part of the Senate majority that voted in favor of the controversial Anti-Terrorism Act of 2020, a law assailed by 37 groups of petitioners but mostly upheld by the Supreme Court.

Gordon’s political career began when he was elected as the delegate of the first district of Zambales to the 1971 Constitutional Convention. After his father’s assassination, he became the Mayor of Olongapo City, transforming the city into a highly urbanized area.

He successfully returned to the Senate in 2016 as an independent senatorial candidate but quickly allied with the president. He took over as chairman of the Senate justice committee in the 17th Congress, following the unprecedented ouster of Senator Leila De Lima who was leading the panel’s inquiry into the extrajudicial killings linked to the administration’s drug campaign.

As Senate blue ribbon chairman in 2021, Gordon led the investigation into the alleged anomalous procurement of pandemic supplies from Pharmally Pharmaceutical Corp., a firm that was newly incorporated and undercapitalized in 2020 but managed to bag the largest contracts with the government. This marked a souring of his relationship with the president who began to rail at him during public addresses, accusing the senator of politicking ahead of the elections.

He is now seeking reelection under the senatorial slates of the 1Sambayan opposition coalition and Vice President Leni Robredo, together with De Lima who has been detained for over five years. The latter welcomed Gordon’s inclusion in the slate and lauded what she called his courage and conviction during the Senate hearings on Pharmally. He has also been included in the Senate lineups of Senators Manny Pacquiao and Panfilo Lacson.

Gordon first entered public service after he was elected as the delegate of the first district of Zambales to the 1971 Constitutional Convention. After his father’s assassination, he became the Mayor of Olongapo City, transforming the city into a highly urbanized area.

He chaired the Subic Bay Metropolitan Authority from 1992 to 1998 and rose to national prominence after popularizing the Wow Philippines campaign during his stint as tourism secretary from 2001 to 2004.

In his two terms as senator, Gordon authored at least 45 laws, including the one that abolished the death penalty during the administration of President Arroyo. He also authored laws that extended the validity of Philippine passports and driver’s licenses.

He successfully returned to the Senate in 2016 as an independent senatorial candidate but quickly allied with President Duterte, supporting the administration’s flagship campaign against illegal drugs. He replaced Senator De Lima as chairman of the Senate justice committee in the 17th Congress after she was ousted from the post. As the justice committee chairman, he denied that the extrajudicial killings linked to the so-called war on drugs were state-sponsored.

Gordon was also part of the Senate majority that passed the Anti-Terrorism Act of 2020, a law assailed by 37 groups of petitioners but mostly upheld by the Supreme Court.

In 2020, the Commission on Audit’s findings of poor spending of P67 billion in pandemic funds by the health department led to full investigations by both chambers of Congress into alleged anomalous pandemic contracts.

The Senate blue ribbon committee hearings, led by Gordon, uncovered that Pharmally bagged some P10 billion in deals in 2020 and 2021, edging out all other bidders despite its lack of capital and prior experience to manage such contracts. Close associates of the president, such as Chinese businessman Michael Yang, were linked to Pharmally by its own executives who claim that the president’s former economic adviser acted as their financier and guarantor. Also implicated were President Duterte’s closest aide and Senator Bong Go and Lloyd Christopher Lao, the latter a volunteer election lawyer of the president who later headed the Procurement Service of the Department of Budget and Management and signed off on the Pharmally contracts.

In October 2021, President Duterte ordered his Cabinet members not to attend the blue ribbon committee hearings into the Pharmally controversy, including Lao and health secretary Francisco Duque III, causing the Senate leadership to petition the Supreme Court for a temporary restraining order against the directive.

The probe signaled a severing of ties between Duterte and Gordon, causing Duterte to order COA to investigate the Philippine Red Cross which Gordon chairs.

In October 2021, Gordon released the Senate panel’s partial report that recommended the filing of administrative and criminal charges against Pharmally officers, former presidential economic adviser Michael Yang and Lao. According to Gordon, eight senators have signed the report, as of Feb. 7, 2021. Sen. Panfilo Lacson later clarified that while he signed the report, he had “strong reservations” about a comment in the report stating that President Duterte had “betrayed [the] public trust.” Gordon said that 11 senators, who make up the blue ribbon committee, should sign the report so it could be brought to the plenary floor for debate.

Gordon was an associate in the Angara Cruz Concepcion Abello and Associates Law Office in the 1970s to 1980s.

He has chaired the Philippine Red Cross since 2004.

Richard “Dick” Gordon has been committed to serving the public his whole adult life. His journey began with his election as the youngest delegate to the 1971 Constitutional Convention where he pushed for the inclusion of an article on the Duties and Obligations of Citizens, even while still a student at UP College of Law. Thus, at the start of his public career, already central to his philosophy is that the relationship of the citizen to the state is defined not simply by his rights, but equally by his obligations.

In the wake of the assassination of his father, he was elected as Mayor of Olongapo City, and transformed what was then known as the Sin City into a Model City, defined by its cleanliness, and the discipline of its residents. In the face of dramatic unemployment in his city with the removal of the US Naval Base at neighboring Subic, he pushed for the creation of the Subic Bay Metropolitan Authority and became its founding Chairman, transforming it into the most successful base conversion recognized by international media, generating over 200,000 jobs on the back of over USD 3 billion in investments.

When Dick Gordon was appointed as Tourism Secretary, he placed the Philippines on the world tourism map with his famous WOW Philippines program. The country’s tourism industry thrived under his watch, even without a big budget, without having to copy other countries’ tourism slogans, and even as others in the region reeled from crisis after crisis – 9/11, the SARS epidemic and the Bali bombing, pump-priming what has now been a decade and a half of virtually uninterrupted tourism growth.

When he won a seat in the Senate, Dick Gordon turned his extensive executive experience into shaping national policy. He authored major laws, a number of which aimed to dramatically transform the political and economic landscape of the country – the Automated Election Law, the Tourism Act, and the creation of economic zones such as the Poro Point Freeport in La Union, the Freeport Area of Bataan in Mariveles, and Camp John Hay in Baguio, all to jumpstart investment and development. Others dealt with longstanding problems such as Veterans Benefits, the Free Patent Law and the National Disaster Risk Reduction Law. As Chairman of the Blue Ribbon Committee, he investigated the 2004 P728-Million Fertilizer Fund Scam and the assailed ZTE National Broadband Contract, demanding accountability. In the recent 2016 national elections, he was overwhelmingly re-elected and placed 5th in the Senatorial Elections.

Dick Gordon’s work is well known to many of us. His effectiveness as a leader and a mover of people has been recognized and heralded through the various awards he has received – Ten Outstanding Young Men (TOYM), the Outstanding Filipino (TOFIL), the University of the Philippines’ Most Outstanding Alumnus in Public Service, and three years later, its Most Distinguished Alumnus, the highest award that could be bestowed by the UP Law Alumni Association. More recently, Dick Gordon was also awarded the Philippine National Volunteer Service Coordinating Agency’s Lifetime National Volunteer Achievement Award, the sole recipient of the award in 2015. Gordon’s achievements in the 48 years that he has been active in the Philippine Red Cross has also been recognized, having been awarded the three highest awards from the Red Cross, namely the Aurora Aragon Quezon Medal, the Silver Humanitarian Service Cross Award and the Gold Humanitarian Service Cross Award. Dick Gordon was also a recipient of the Japanese Red Cross Gold Humanitarian Award. He also received recognition from various foreign media such as Asiaweek’s Twenty Great Asians of the Future and Asahi Shimbun’s 50 Young Leaders of Asia, among others.

Finally, he is a lawyer by profession, but has also been, at various times, a broadcaster, a businessman, a lecturer, and an inspirational speaker. He graduated from the UP College of Law, and holds a bachelors degree in history and government from Ateneo de Manila University.

Posted by Profiles - May 7, 2022 0
Lady Anne Sahidulla is a politician who describes herself as the princess of the poor, descending from the Sulu royal sultanate…

Posted by Profiles - March 4, 2021 0
Sol Aragones is the incumbent Representative of the Third District of Laguna in the 18th Congress. Born to a poor… 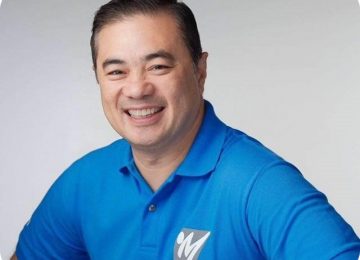