Abner Afuang served as mayor of Pagsanjan, Laguna, from 1998 to 2001. He lost his reelection bid in 2001, as well as an attempt at the Laguna vice gubernatorial post in 2006. In his 2019 senatorial run, he highlighted senior citizens’ welfare and addressing criminality in his campaign. He was a police officer in the Makati police department.

Abner Afuang grabbed headlines for some stunts, like burning a Taiwanese flag in 2013, defacing a Chinese flag in 2015, and dousing model Hayden Kho with water during a Senate hearing on a lewd sex video in 2009.

Abner Afuang is a seasoned public official who began his career as a decorated but controversial Makati cop in the 1970s, receiving a Most Outstanding Police Officer award for an infamous shootout in Magallanes, Makati with his former anti-crime colleague and then-Manila City Mayor Alfredo Lim.

Afuang joined the National Bureau of Investigation as an agent in the early 1990s before becoming a municipal Mayor of Pagsanjan, Laguna from 1998 to 2001. He also became a bounty hunter after his time in law enforcement, inspiring the 1988 film “Afuang: Bounty Hunter”

He made the headlines several more times, participating in a number of demonstrations, including the burning of the flags of foreign states, both to assert Philippine sovereignty and the rights of Filipinos both at home and abroad.

In his most high-profile protest, Afuang disrupted a May 2009 Senate hearing on a lewd scandal when he poured water on Dr. Hayden Kho, a compromise from his initial intent to throw a chair at Kho after Afuang was overcome by his emotions.. He was arrested, detained and charged for disturbance of proceedings but later released after the Pasay Regional Trial Court dismissed the charges upon recommendation by the prosecution’s office.

He wrote an opinion column in a national tabloid paper, “Hataw: Diyaryo ng Bayan”, from 2014 to 2016, commentating on various social and political issues such as drugs and criminality, various politicians, social justice and the West Philippine Sea dispute, among others.

Afuang in 2019 garnered only 559,001 votes and ranked 42 out of 62 Senate aspirants. On his second try for the Senate, he is advancing an anti-illegal drug and anti-China agenda.

After Afuang completed his lone term in public office as municipal mayor of Pagsanjan, he vied for other positions numerous times–Pagsanjan mayor, Laguna vice governor, Manila councilor and the Senate; he lost all such races.

In October 2015, he filed a petition with the Commission on Elections to have the former governor of Laguna, ER Ejercito, and his son Jorge Antonio Ejercito declared as nuisance candidates after the duo allegedly made a mockery of the elections when they filed their candidacy for the same gubernatorial post in Laguna and considering the older Ejercito’s disqualification and removal from his position due to campaign overspending in 2013. Afuang’s petition was dismissed in February 2016, due to Afuang’s lack of legal standing and lack of merit.

In 1988, Afuang: Bounty Hunter, a local Filipino biographical action film in 1988 based on Afuang’s life story and starring Philip Salvador, was produced and released by Viva Films. That was not Afuang’s only brush with the entertainment industry–according to GMA News Online, he has also been a former actor under Sampaguita Pictures.

Afuang would later pen an opinion column in a national tabloid paper, commentating on various social and political issues such as drugs and criminality, various politicians, social justice and the West Philippine Sea dispute, among others.

Afuang made the news when during protests, he burned a Singaporean flag in 1995 to protest the abuse of migrant workers, a Chinese flag in 2012 in relation to the Panatag (Scarborough) Shoal standoff, a Malaysian flag to object to President Benigno Aquino III’s alleged failure to protect and support the Filipinos killed in bloody attacks in Sulu in March 2013.

He burned Chinese flags thrice in 2014 – protesting in February the cancellation of visa-free travels to Hong Kong for Filipino public officials after the deadly August 2010 hostage crisis at Quirino Grandstand, in April over the harassment of a Philippine Navy vessel by the Chinese coast guard on Ayungin Shoal, and in November to oppose China’s continuing reclamation activities in the West Philippine Sea. 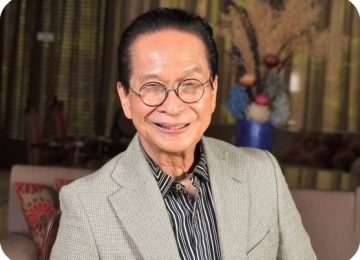 Posted by Profiles - May 8, 2022 0
Willie Ricablanca Jr. is a pastor who has directed his advocacy for social transformation to establishing two organizations, the Community Force…

Posted by Profiles - May 7, 2022 0
Win Gatchalian is a businessman and politician who is currently serving his first term as senator. He is also the…